When I first told people I was travelling to South Korea – as a holiday – I got mixed reactions, particularly in recent weeks. I told my poppa (grandad) I was going, and aside from his ‘What? You’re going [on holiday] again?’, when I told him where I was going, he pulled a face and said ‘oh dear’ (with an accompanying thumbs down), as if I had just delivered some very bad news indeed.

I’d like to point out that Seoul was named on the Lonely Planet – Best in Travel 2017 ‘Cities’ list, which you can read in full here. Although I must admit, the image used to accompany the entry does not do the city justice, in my humble opinion.

And as I draft this, en route to the airport, I hear someone’s BBC news app go off. I’m a curious soul so I check my app and low and behold, North Korea is suspected of carrying out nuclear weapons testing, which is why people are so skeptical and bemused about the fact I’m travelling there I suppose.

There were further updates on the flight to Seoul, including the news that South Korea and the US are going to increase military drills. Very reassuring.

Obviously I didn’t share any of this news with my parents, and likewise they didn’t mention it to me…

Once I landed in Seoul I got VERY excited! I met my friend Katie who has quit her job to travel the world!

On the first night we took a stroll around the city and saw the markets and shops. There were people singing in the street (all quite close together so the sounds overlapped each other) and there were so many places to eat. It was very lively for a Monday night, which reminded me of a news article I read on the ‘North Korea situation.’

In essence, a South Korean had been quoted as saying that although the North was busy (possibly) planning the nuclear annihilation of the world (not these exact words), people in Seoul were still partying on the streets. This was very much the vibe we got too!

Katie and I looked at each other, unsure how this was going to play out. It turned out the interesting looking egg thing was in fact ours! It was an omelette sandwich, with cheese in the middle. It was honestly so delicious.

While we were walking around the plaza, it struck me how quiet it is in the city. I think you can get a good measure of a place by the number of little birds you see, or hear, and I realised I had neither seen nor heard any little birds! Not one! But I saw a few later.

We continued to explore the city (which, by the way, is exceptionally easy to get around because the metro system is amazing), we saw the Lotte complex (there are a lot of Lotte things in SK) and visited the N Seoul Tower. We went with the hope of seeing the sunset, unfortunately, it was not to be, but it was cool to see the city before and after sunset. 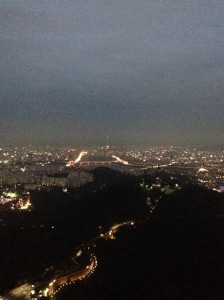 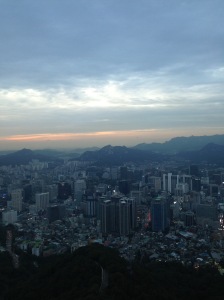 In the evening we had our first Korean BBQ experience. Obviously not recommended for vegetarians, and mildly intimidating for people like myself who don’t often eat meat, but a must do (and enjoyable experience) nonetheless.

It rained today. A LOT. We spent much of the day in a park, somewhat trapped by the weather, but also enjoying a quieter day. We later explored Lotte World Mall, including the Hard Rock Cafe, which is kind of a family tradition of mine.

Today was the polar opposite of yesterday, and was the hottest day by far.

We visited Gyeongbokgung Palace, which, to be brutally honest, was underwhelming. I think it’s important to note here that much of Seoul is new. The buildings, and design – it all has this new-cool-architectural-design feel. Even the old places have been, or are being, renovated.

We visited the folk museum, which was really interesting! It gave good insight into the history, culture, and traditions of SK. We also walked to the traditional village, Bukchon Hanok, which is situated on a hill and proved to be a brilliant vantage point for the sunset.

From here, we went to Cheonggye Plaza, which I highly recommend! It was a lovely way to spend the early evening and proved how great Seoul is at night. It’s lively, friendly, and feels unbelievably safe.

Last night was one of the most tormented nights I’ve had in a long time. A pesky mosquito terrorised me all night long. Every time I closed my eyes it flew past my ear, causing me to jump in terror. The sneaky bugger even bit my arm, although I think being bitten once was lucky given the number of times it’s dive bombed around my ears.

The timing could not have been worse because our time together in Seoul was nearing the end (Katies’ flight is early Saturday morning) and we have a big hike planned today.

We’re going to hike Suraksan, with considerable advice and (highly recommended) guidance from this blog, which you should consider reading if you’re going to do this hike.

We took the subway from haejpon to danggogae station, we took Exit 4 but didn’t exactly take the trail.

I feel like there’s something I need to explain here before I continue. I’m not a stupid person, I sometimes struggle with map reading but I can generally follow signage. However, since I landed in SK (even at the airport) I have constantly been confused by the number of signs that say the same thing but point in conflicting directions.

So we began the hike and almost immediately a swarm of mosquitos were on my legs. Apologies for the interjection, but as poor Katie found out during our trek, I cannot stand bugs. Things that fly (specifically at me, or dive bomb around my head), and things that crawl (I’ve had several traumatic spider incidents in the past two years, at home and away). I cannot emphasise this enough.

So Katie found this out, and also learnt how hysterical I get after bugs touch down on me. Does anyone else feel like their skin is crawling? Like they’re being nibbled by a small army of (apparently starving) mosquitos? There were lots of squeals and huffing and I quickly put my leggings on – I don’t think I would’ve lasted in shorts. I did apologise to Katie re: ‘the big trauma’ on several occasions, but it did foreshadow the very beginnings of the hike.

We came off track a couple of times but always managed to find our way back (Katie is a VERY good navigator!) but the signage definitely didn’t help at times (or at least I didn’t think so).
Later during the hike, several unusual things happened.

Number one, I saw a snake (sorry, I didn’t take a photo), but it was brown with green on it, perhaps in a wiggly pattern and I’d say it was about 1.5-2 foot long but only an inch wide at tops. This is when I learnt Katie feels about snakes, the way I feel about Mosquitos. Our pace definitely quickened after this.

But then came the military base / training ground that we appeared to be going around. I’d noticed a helicopter flying over at several points along the route, which looked to be military, but I couldn’t be sure. But once we saw the barbed wire and signs prohibiting photography (we thought it best to adhere to this), we then started hearing firing? Like, maybe a live ammunition exercise? It was a little disconcerting but we powered on.

There came a point though, about two hours in (although it was baking hot – 27 degrees C minimum) and I was flagging. We had 1.7km left, but I was concerned that if we (I) struggled to get to the top (should have mentioned earlier, I was wearing trainers, which were good but not great), it might be even harder to get down and I felt that three hours back would be tough. So we turned around and made it back down in less than an hour! We came out a slightly different route to the way in, but we found the metro okay.

My first thoughts of Danggogae were how different it was from Seoul – okay Seoul is the capital, I get that. But this place had a very rural feel compared to the big city. There weren’t as many high rise buildings or fancy apartment blocks, but smaller, more traditional housing.

I would recommend the hike and I did feel bad that I wasn’t able to complete it, but it was a great walk and I was absolutely shattered on the metro back.

In the evening we had our second round of Korean BBQ, which was even better than the first! I’d highly recommend this place: (it’s near the waffle shop and churros place).

I didn’t have any great plans for my final two days in Seoul. I had considered heading to the DMZ (Demilitarised Zone), however, I had reservations… it was only the previous Sunday that NK had carried out another nuclear test, and several Sunday’s before, a missile had been launched. I was uneasy but I didn’t want this to impact on my trip. Ultimately, I decided not to go… Maybe next time?

I spent my final two days exploring Hongdae. I visited the cool picture-perfect park where k-pop groups, or wannabes, rehearse – I know this because I saw them, and also I saw some kind of TV show being recorded (I just saw a woman slapping a man in a suit VERY hard across the face). I also explored the cool shops, cafes, arcades (FYI this activity is highly recommended but be prepared for a complete sensory assault – it is loud and it got louder with every floor we climbed!), and the completely random things going on (there was a young guy doing juggling and fire stunts/tricks). 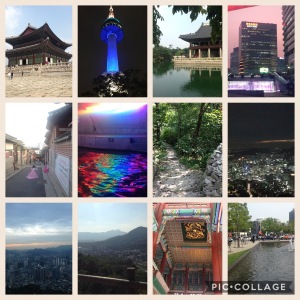