Day 1:
I landed on a Thursday afternoon and after getting my bearings, we headed into central Vienna for dinner.

I’d already been warned about the massive schnitzels, described to me as “outrageous portions of meat”, which is apparently a common theme at Viennese restaurants! On this adventure, TripAdvisor played a massive role when it came to finding good places to eat and things to do.

We ate at an Italian called Da Capo – it didn’t disappoint!

Day 2:
Friday was our first full day in the city and as we were staying slightly out of the centre, we opted to take the scenic route and walk in. I often prefer this to public transport (if time allows) because I find it a great way to get a feel for a city, you get to check out the architecture, explore places along the way and carve your own path.

Eventually we reached the museum quarter where we found the butterfly house. Our plans were quite flexible so we went and it was great! I’d definitely recommend it if you have time – our only concern was how to gently remove the butterflies attached to our clothing without actually touching them or stepping out in to the cold. 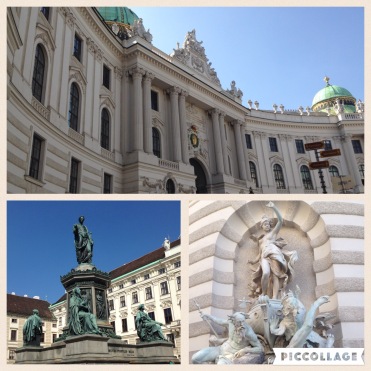 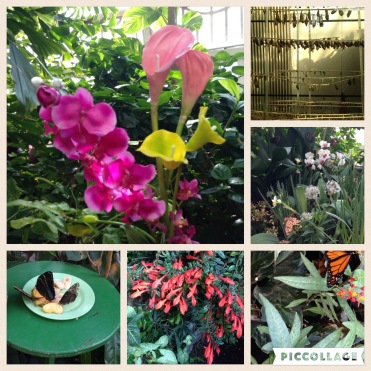 From here, we headed back to the city through the cobbled streets and quaint shops that vaguely reminded me of Milan. It was time for a break so we decided to visit the highly recommended Central Cafe but the queue was out the door so we chose Cafe Landtmann instead. It’s so grand inside it had previously been described to me as ‘feeling like you’re dining on the orient express’ and the food (or cake in this instance) was delicious. 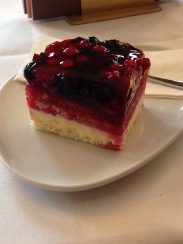 In the afternoon we headed to Freud’s house – which is the reason Vienna is known as the city of dreams. 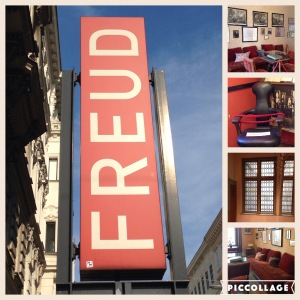 This was our only solid plan so we were pretty disappointed upon arriving and finding the place closed…until we realised we were actually looking at the opening hours for the library. Doh!

Anyway, we saw Freud’s house, his infamous study and watched some old family videos narrated by his daughter Anna Freud (pioneered the way for child psychology). There was a really interesting exhibition about women in psychotherapy including pioneering females.

By the time we’d finished exploring Freud’s house it was getting chilly. It was March and although we’d been lucky with highs of 14 degrees, it was super cold in the wind and we were considering going on the Weiner Riesenrad aka the big wheel from the film The Third Man. However, after reading several reviews about night time experiences (specifically, it being too dark to actually see anything) we opted to wait until the next morning.

In the evening we ate at Pho Saigon – a highly rated Vietnamese restaurant close to the centre. It was super busy so we were lucky to get a seat. I found the fresh spring rolls disappointing as they lacked in flavour but the beef salad and mains were both really good – I inadvertently ended up ordering a Vietnamese take on a schnitzel.

Vienna has quite a sociable feel in the evenings so although drinking in is definitely not cheap, there are some great outdoor cafes with big patio heaters – the only downside to this being the number of smokers. Cafe De L’Europe became our go to place but we also visited the Hard Rock Cafe for drinks.

Day 3:
Saturday marked the last full day of our whirlwind trip to Vienna. I love a good brunch so we opted to get the U-bahn to Joseph’s. It’s actually not far from U-bahn station Wien Mitte but is easily missed unless you’re specifically looking for it because it’s one of those hipster places that doesn’t even need a sign on the front…

It was quite busy and we didn’t really know the protocol, eg whether or not we had to queue for a seat, so we left and awkwardly returned after walking past the window and spotting a table. We ordered fried eggs on sour dough under a mound of rocket, sun dried tomatoes, parma ham and Parmesan cheese and honestly, it was so delicious. It was amazing. The only down side to the super fresh salad was the lump of soil that came with it. My only regret is not actually taking a photo of this.

From there we walked 25 minutes to the big wheel (Weiner Riesenrad) which is located inside an amusement park. It was interesting to see how the wheel has been viewed over time – I think it’s an important symbol to the Viennese because it’s remained strong and steady when the rest of Vienna has faced turmoil. 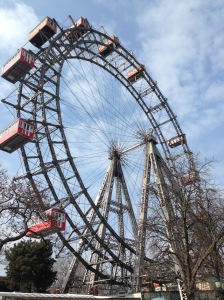 We hopped on the U-bahn back to the museum quarter to the natural history museum as we missed out on the ‘weird and wonderful’ Narrenturm museum aka the Pathological-Anatomical museum. We only had 2.5 hours so we whizzed around – it’s so worth a look, honestly, I could’ve spent so many hours in there! 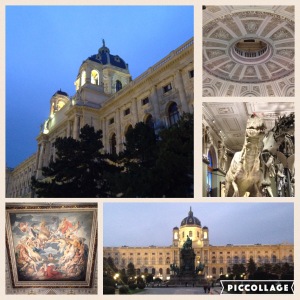 It was my turn to pick a place to eat and after unsuccessfully finding a reasonably priced Vegetarian place (I’m not vegetarian but don’t eat much meat) we headed to the Spanish restaurant El Rincon de Don Quijote for tapas.

My expectations were low because the restaurant was empty when we arrived and I wasn’t sure what to expect but the food was delicious. I particularly loved the dates wrapped in parma ham stuffed with almonds. It tasted so good! I don’t know if I’ll ever find anything that delicious again – that’s how good it was. I’m also not a massive fan of meatballs but theirs were incredible.

After this we had social drinks under the heaters but surrounded by smokers and found some of the best gelato I’ve eaten. Ever. Seriously. At Zanoni & Zanoni.

Day 4:
We packed up and left early to fly back.

If anything, I have two regrets: not taking enough photos, (particularly of the food) and missing the Narrenturm museum because we didn’t check the opening hours (10am-1pm).

Everything else was great and I’d highly recommend a long weekend / city break in Vienna. I think we made good use of our time, balancing everything we wanted to do (museums, exploring, food stops). Next time I’d love to head out to the mountains and do a hike to see a different side to Vienna.