‘Jeez Fliss, that’s deep’ and ‘interesting holiday reading material’ are two responses I’ve had to the book that I started reading while on the beach in Kaiteriteri (New Zealand).

Last year I read something similar when I read ‘The Top Five Regrets of the Dying’.

I don’t really know how to begin this book review so I’ll start at the beginning.

(Note to self: Why do I feel the need to write an introduction to this book? Am I explaining myself? Well, sort of. I think it’s because, in short, this is the memoir of a woman who died at a relatively young age). 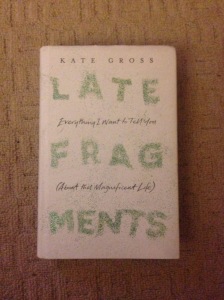 When I read The Top 5 Regrets of the Dying, I guess it was because, on some subconscious level, I wanted to read about the lessons death can teach, so that I may live as regret-free a life as possible. I learnt a lot and focused my mind: what do I want from life? Who am I? What have I achieved so far? What is really important in life?

At the time, the main driving force behind it was this (irrational?) fear that I’ll wake up when I’m 50 and realise that I haven’t done all of the things that I dreamed of when I was younger, probably in another world it would seem.

I made a decision: To do everything I want to do, and not waste time doing things I don’t want to. (Here’s the flexibility: it’s okay to change my mind about things).

I read the Hhappiness Pproject in January (bit of a contrast I know) but one chapter focuses on reading literature by people who have faced death. The reason being: to appreciate the very life we have right now, without a big catastrophe striking (and therefore making us realise what we had).

I’ve been very fortunate in my life. I haven’t had to face any great tragedies during my adult life. People wonder why I’m reading this book, and I feel silly saying ‘I’m reading it so I appreciate my life more right now’. For some people, they don’t need these jolts of realisation because they have faced personal trauma themselves, which has made them appreciate the little things.

Enough about me though.

I vividly remember the first time I heard about this book. I was lying in my bed in London, reading this article on the guardian ‘family’ section. I was so saddened by what I read, I hid under the covers while hot tears trickled down my cheeks.

This isn’t just any memoir, and this isn’t a really sad or depressing read either.

It remains upbeat in tone throughout, or maybe honest is a better word. Nothing is emphasised too greatly. There are good times, there are bad times, and there is an appreciation for these times and everything in between.

She’s honest, she’s brave and the book is deeply personal and moving. I find it so sad to know that she is gone, far too soon, even though I never knew her.

I think this book resonates so strongly with me right now is also because of the nature of her cancer. Of her ‘tummy trouble’. We have ‘tummy troubles’ in the family, and perhaps I didn’t realise how lucky an escape one of my closest family members has had from this disease.

And even as I write this, it feels terrible to say, or acknowledge how grateful I am that mine isn’t having a good time, but I’m so glad it’s not cancer. It feels unfair to say that.

The book doesn’t end abruptly, it is somewhat matter of fact. There is no final speech, no ‘you must do’s’ or ‘if only’s’. It’s just an honest portrayal of a successful woman in her mid-30s who passes too soon. She highlights the great things in her life, her achievements, her character. The latter, the emphasis on her character, is what makes the book so incredibly personal.

She talks about her family, but she doesn’t focus on what would have been, what could have been and the things she will inevitably miss. I can only imagine that she often had these thoughts, but to let them take over ones mind would surely be soul destroying.

That’s what makes her story so brave. That she even wrote this book in the first place. And it’s quite brilliant that she was able to finish the book, with such charm and personal character, while her life was coming to an end, and so unfinished in the grand scheme of things –

I say this as a person looking from the outside in, as a person that can’t really even begin to understand what it must have been like for her, or for her family. And I don’t say this to take away from her achievements, because she carved herself a marvellous life.

I only hope mine will be as full as hers.