Sunday: I’ve nearly been on the bus for a week! I can’t believe it. Currently I am at lake Wanaka, by this afternoon I will be in Queenstown and tomorrow I leave for Dunedin. This is nuts!

I woke up in a stiflingly hot dorm, but it was cosy and far better than the Base Hostel I stayed at in Auckland. This morning we have two options: puzzle world or a 1.5 hour hike up Mount Iron.

The hike was fantastic! Lake Wanaka is SO huge! It’s breathtaking and the hike is a great way to see everything. Puzzle world sounded pretty great too though, although my friend described the experience as “harder than my degree”. 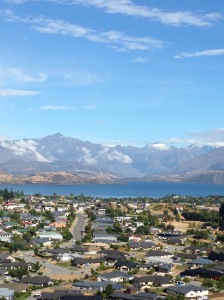 We’re heading to Queenstown via Cromwell. A small town with a fruit shop. (This is all I’ve been told so far).

I’m sad that the group I am part of is branching off after tonight, but I’m happy that I got to meet them and feel a part of our little group.

It’s a place of extremes, apparently they can have some of the hottest days during a New Zealand summer, and some of the coldest in winter. We’re also crossing the 45th parallel! It’s pretty exciting! It hardly ever rains here, but they do have a massive lake (a man made one called Lake Dunstan).

The town Cromwell is named after the English man Oliver Cromwell.

Gibbston Valley is protected from the west coast weather and so has lots of microclimates, making the area the most southerly to produce wine, particularly red, in the world.

AJ Hackett bungy jump! We stopped by to hear the story of how the Bungy jump came about and saw footage of the first jumps – it’s totally crazy! 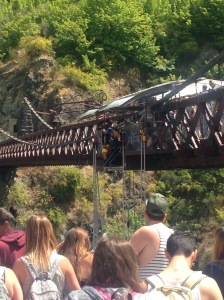 Queenstown: A resort town, known as the capital of adrenaline sports! Perfect for summer or winter activities (lots of skiing including heli skiing!). The Maori settlers didn’t really stay here, but the shot over river was so prolific in the amount of gold found there, it drove down global prices and encouraged many settlers to come to the area.

Lots of local rivers named by a farming guy called ‘William Rees’, (I think this is how his last name is spelt so I think maybe he was Welsh).

On the drive in, we saw a beautiful mountain range called ‘The Remarkables’, they run north to south which is unusual and the highest peak is 2,400m high! In the past few years, the size of Queenstown has doubled from 12,000 to 25,000 people.

It’s pretty hard to miss the 82k long lake Wakatipu, glacier carved with a depth of around 380m at the deepest point. Funnily, it is shaped like a lightening bolt! From what I’ve gathered so far, lakes are to New Zealand what temples are to Thailand. Frequent but each is unique.

Queenstown is a small shopping town that’s good to explore. I ended up going on a Kiwi bar crawl which ended at ferg burger at 1.30 am. We were told that you can beat the typical 45 minute queue by going at this time and it worked! For the first time today there was no queue! This place is an institution in Queenstown and even recommended in the lonely planet guide book.

I’m glad that I’m coming back to Queenstown for two more nights after this. It has so much to offer, next time I definitely want to hike and chill on the beach by the lake.

Tomorrow, or rather, later today… Dunedin!