Can you tell I’m excited?

When location scouting for Lord of the Rings, and later the Hobbit. The location finders (for lack of a better name?) flew over Alexander farm, a huge stretch of farm land with a huge man made lake and a tree next to it (it was the tree that was the main draw – it would later become the huge tree in the party scene at bag end before Bilbo slips off!).

As the story goes, the scouts went to chat to the farmer, but he was a massive All Blacks fan and they were playing at the time, so all he said was that if they went in to the fields, they had to close any gate they opened behind them.

Peter Jackson came over and discussed with the farmer, and after filming the birthday party scene, he decided that this area would be perfect for The Shire in its entirety and so it became!
In Hobbiton, the area is supposed to house 300 hobbits in 44 hobbit holes!

The key aim has been to leave the integrity of set and not commercialise it. Initially the Tolkien family were not keen on his legacy being turned into a commercial entity. Hobbiton has been open since 2002 (before hobbit was even filmed). It’s a joint enterprise between Peter Jackson and the Alexander family.

It was harder building the set the second time around because it had to be built more permanently and it had to be aged to make it look as if hobbits could have actually lived there. The hobbit holes are themed according to the jobs of the hobbits and the further up the hill the houses are, the higher the status of the hobbit!

The dell is a community of houses with 7 homes and the pond in the middle is supposed to be frog pond (based on the books) and now it’s full of frogs in real life! But during filming, they were really loud so they got taken away, but they kept making their way back across.

People were hired to stay on permanent frog watch – just during filming. Seeing as native New Zealand frogs don’t croak, I was curious to where these were from, apparently they’re Aussie frogs.

This area was designed in miniature to make Gandalf look big! In the books, there are plum trees, but to add to the ‘making Gandalf big effect’, they planted Apple, Pear and Quince trees to keep them small and then tied plums on to them, therefore appearing to be Plum trees! Even though they only featured in the film for 0.7 of a second!

Bag end (Bilbo’s hobbit hole) is the biggest hobbit hole so that they could set up the camera inside and look out across the whole of the shire. The huge tree above it is actually artificial! It has 250,000 fake, hand painted leaves on it. At the time it was one of the most expensive set props. It look a year and a half to build and was a replacement for the original that was demolished with the first set. On the standard edition DVD, the tree is only shown for 6 seconds!!!

Originally hobbiton was going to be filmed across 12 locations including Ireland in the UK!

Lake Rotorua is one of seven lakes in the area, all created by the Taupo volcanic area. The most active volcano is in this area and often pumps out a large ash cloud. There’s lots of geothermic activity here including mud pools, hot springs and geysers.

Two of the main Maori tribes settled here because it was abundant in food; long tailed eel, Moa and kiwi. They also used to the natural geothermic activity to their advantage (hot pools for warmth). There were lots of inter-tribal wars over this land, but the land was defended very well.

I have opted to take part in a cultural Maori experience and an overnight stay. I’ve heard mixed reviews: some say it’s really commercial and touristy and others say it’s a great experience.

We have to elect a chief for our overnight stay – the chief has to be male which sucks – I mean hello 1950. Even when we walked in, our chief led us, and the women had to walk in the middle with the men behind.

It turns out this is because Maori believe if a man dies, one individual is gone. But if a woman dies, a whole generation is lost – therefore women have to be protected.

I asked what would happen if no men joined the trip, would we get a stand in chief? No, there would be no chief. Seemingly, women cannot speak for themselves. I accept that this is tradition but also find it hard to comprehend.
Later, we saw a sculpture of a man and a woman, the woman is placed on top as she is deemed more important and is said to ground the male.

Being so traditional, I was curious as to the Maori stance on homosexuality – which I think is a valid question based on what I’ve heard so far. I’m told that there is more of an individual stance, rather than a ‘Maori’ view. I think that perhaps this was a carefully answered question, so as not to offend. But I’m not sure.

I was a bit uncomfortable during this moment because I felt like I was the centre of attention which I dislike immensely!

Above every bed, there is a Maori traditional art form. In the first hut, they began very traditional and got more modern as it went around the room.
The Fantail in Maori may be a spiritual animal but it can mean death, depending on what it does. So although it may be welcome in some circles, in others, it may mean that a member of the family will soon be joining the spiritual realm. The New Zealand night owl is the guardian of the night.

This is the carving above my bed:

It means; Manaia (mon-I-ah) spiritual guardian – is important outside houses, as he protects people and guests spiritually.

It’s very fitting that I have picked this room, a room full of bird sculptures – those who have been reading my blog whilst I’ve been in New Zealand will understand I have such an affinity with birds and this place has been perfect for me to discover a new or perhaps forgotten passion.

In Maori, it is said the door was created for the living, but windows were created for the dead. Once they die, their spirit is passed through the window. Although there are still traditional burials (sitting upright in caves), some people are buried in the ‘modern way’. Maori believe in giving back to the earth so they are buried. They’re very spiritual people, and have prophets – some are religious.

We got to walk around the woods which is designed to look like a classic Maori village or settlement. We got to learn about Maori culture and traditional Maori activities, but again, the men got to learn the Haka, not the women 👀 If women have their forehead tattooed in real life or on a carving, they are very high ranking. 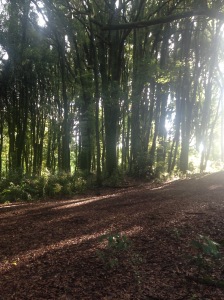 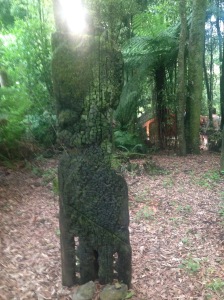 Overall, Hobbiton was GREAT! A must for any fan! I’m not sure how I feel about the Maori experience stay – I can appreciate the difference in other cultures and traditions but I find it very hard to comprehend at times.