Saturday: The Bottom Bus: Day 2
Those annoying roommates are up and packed unusually early. I fear they may be on my bus today… They’re on my bus 😤

I’m excited for today, although the driver has just asked ‘does anyone know what the plan is for today?’ [muffled voices] ‘no’. He replies: ‘Me either so let’s see!’

Wowzer. Expectations are plummeting. Today I’ve hopped back on the bus after my stay in Dunedin and we’re supposed to be driving through the Catlins, and past Curio Bay, arriving in Invercargill by around 8pm.

You see, unlike the kiwi experience, the end destination is not ‘the destination’ on the Bottom Bus. Today is all about the journey, on which, we may get to see some Hectors Dolphins *fingers crossed pleeeeeeeeeease* 🙏

Maybe he was just joking, he seems to know what we’re doing really… It’s very rural and agricultural down here, and I’ve just remembered something I learnt the other day… When we went to check out the old abandoned hospital-turned-B&B, we stopped by a lovely local butcher and cheese factory. (Both were absolutely fantastic).

The guy at the cheese factory explained why you often have to drive in the opposite direction to go back on yourself to get to where you want to go. Well, the English designed many of the roads for New Zealand without actually having ever been here. What’s more, they drew many ‘paper roads’ on the map that were never actually built, but legally, as they exist on paper, the public have some kind of right of way across private land that includes a paper road. How bizarre is that?!

First stop, Kakapoint – a seaside community with many people having second houses here for the summer time or holidays. It reminds me of Lyall Bay (good for water sports).

The headland at nugget point is a scenic reserve, in 1870 the lighthouse first shone and is one of 23 located around NZ coastline. It’s primarily there for safety, but also acts as a reference point too. They don’t have lighthouse keepers anymore, they’re all computer controlled from a central base in Wellington. It’s aptly named nugget point because when the sailors used to pass by at dusk or dawn, the sunlight would shimmer on the rocks and make them look like golden nuggets.

Royal spoonbill nest – as noted earlier, these birds are migratory, turning up here around November time to raise their chicks, until they fledge around the end of Feb. Around the end of March – beginning of April they leave – potentially to the warmer climates of the North Island and return in November. They feed on the bottom of estuaries and streams.

Fur seals were hunted almost to extinction as they were used for fuel for oil lamps in the UK and Europe. Once the government realised the species was in decline and was not recovering, they put legislation in place to protect them: the marine mammals protection pact.

Sub-tropical rainforest is the correct name for what is often referred to as ‘native bush’, non-native plants include; Scottish gorse, Canadian pine, Australian eucalyptus.

1872 Surat bay named after a boat that crashed off the coast on NYE as the captain was off drinking and the second mate got distracted. The second mate did everything he could to get the boat rescued, but when the captain poked his head on deck, he was disgusted to find his boat half on the rocks and started shooting at the rescuers. He got imprisoned!

Hooker seal lions are endemic to NZ but generally live in sub-Antarctic conditions or on the Auckland islands (a small group of southerly islands). They’re endangered because at the end of 1900s a mysterious disease spread around the Auckland islands and wiped out 85% of pups during this time. The Department of conservation (DOC) have carried out lots of research but results are still inconclusive.

Owaka – ‘the place of the canoe’ when translated from Maori. There are trees in the area (Totora) that were used to make canoes (hence the name). One of the largest towns in the Catlins but only has a few hundred people living here. This area of the south island is still considered pretty remote.

Lake Catlins is more of an estuary than a lake – dark brown rivers are coloured from the streams that trickle down from the hills – rivers are shallow and slow moving (verydifferent  to the glacial rivers).

Ferns dated back to 180 million years and 122 species in NZ. They all grow from the centre – curled up end is called a ‘corrau’ which means new beginnings (unferling fern leaf).

Papatowai ‘where the forest meets the sea’ in Maori. A place that’s pretty remote and mainly attracts people leaving the city / wanting a quieter lifestyle. 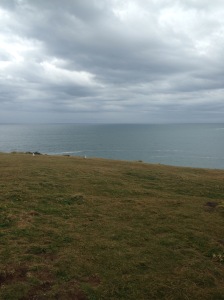 Lake Wilkie has no inlet or outlet, as it was created by a big lump of ice and now rises up and down depending on the natural water table in the area – Manuka forest yonder.

On a walk through the forest, our guide began to explain about a particular tree and the germination process. Sounds fairly standard for a forest chat right? Well then it turned decidedly creepy… He explains the ‘girl tree has to be handled with care, doesn’t it guys?’ Followed by: ‘now you have to gently rub the girl tree because girls like to be rubbed gently don’t they’. Excuse me? No. That was definitely weird and creepy. So WEIRD!

YAY! I have finally spotted my first Dolphins and I am very much overjoyed! 🐬🐬🐬🐬🐬 I’m including this photo and hoping you can identify where the Dolphin(s) would be based on that tiny little fin pointing out…

We’re about an hour outside of Invercargill and we’re driving through some pretty remote dairy farming land. I realise this because we’ve been told this, and also because there are hardly any houses, but when we pass them, a person or people sitting on the porch stop what they are doing to look at our bus, almost as if it’s unusual to see people going through here.

Each of the little houses we pass look to be in different states, some look almost abandoned, some have cute flower boxes under the windows, but what strikes me is the common theme that each look like no one is home. The light is gradually beginning to fade, but there are no lights on, and these houses are so small and flat, sometimes it feels like I’m looking straight through them, right around the back of the house and still there is no sign of life. And no neighbours.

Invercargill is the southern most city and is one of the most productive farming areas in the country. They operate a community bank which distributes $10 million a year to charities etc. And all profits from alcohol sales have to go back to the town. These are the two big sources of funding in the area. It used to be the only city with a world class velodrome in NZ. Very much a Scottish city, also founded by the Scots after Dunedin.

I think this guy is the most old school kiwi I’ve met. This line was a gem: ‘in terms of sports, we’ve got X and Y football teams. And for the girls, we have netball…’ Because girls can’t like football obvs.

All in all, a good day with an odd guide.