Thursday:
I’m pretty tired again after my full day yesterday, I didn’t get back until around 10pm, but it was totally worth it. The thing is, I specifically chose to stay in Dunedin for so long because there’s so much I want to do here.

I just missed the morning castle tour, it’s supposed to be raining this afternoon and I can believe it judging from the moody cloud formations hanging around. So I’ve booked the castle tour for tomorrow morning, and I’ve just walked out of the city to the botanic gardens. I’m currently sitting in the rose garden writing this. There’s something intrinsically calming about sitting in a quiet garden. I don’t think there’s any cruise ships in town today because there’s a decidedly quiet feel and the I-Site was quiet compared to Tuesday.

I’ve met a really cool girl in the hostel who is something of an urban explorer, she’s heading out this afternoon to an abandoned hospital. My curious nature is of course, intrigued to see if it’s as creepy as my vivid imagination is anticipating and my fearful side is terrified that it will be as terrifying as I expect. Still, this is a unique opportunity and I’ll have the evening to myself which will be a first this week.

I’m quite a mild tempered individual. But there are a group of 4 travellers who have moved into my room and I automatically dislike one of them immensely, and immediately. This guy in particular is extremely territorial. This might sound absurd, but my roomie and I discussed this in London and now I understand what she meant. This guy sat in a chair, in front of my bed, in the centre of the room, swinging around, not even acknowledging my existence as I approached with my cheerful smile (I try hard to smile when I first meet people to counter my bitchy resting face – Google it, it’s a legit thing).

As the guy leant on one chair leg in particular, chatting away at full volume, I found myself re-in acting the scene from Matilda where she concentrates really hard to try to make objects move. I found myself willing the chair leg to bend, break or snap.

Maybe coming in at midnight, and rustling to find my toothbrush in the dark did not set us off on the right foot, but I tried to be quiet and my trip finished late so I can’t necessarily help that? I’m hoping they leave tomorrow. I’ll probably look back on this and feel very mean, but one thing I’ve learnt about blogging, is to write in the moment.

We didn’t have too much luck with the abandoned hospital (mental asylum) as it got turned into a B&B (yep…) a few years ago. The even older one in another town was just ruins but the history is kind of interesting. This place was huge, it was grand and it was structurally unsound. Eventually there was a large fire on the women’s ward, killing 37 women. 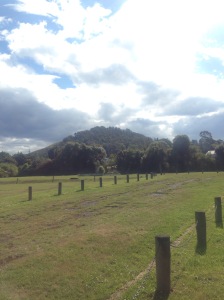 Mount Charlotte behind the ruins 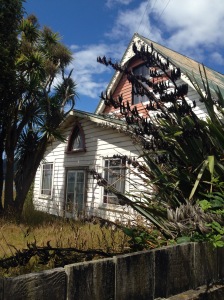 I don’t know too much about the history of New Zealand and mental health asylums but after today I’m intrigued to learn more.

This evening has been entirely frustrating again as the Germans chat away at full volume (I’m pretty sure they’re disagreeing on something as, from my limited pre-GCSE German knowledge, they’re saying ‘no’ and ‘shit’ a lot). They keep chatting until midnight and when I awake tomorrow, I note how unexpectedly quietly they came home in the wee hours of Friday morning. Alas, I talk to my other roomie and no, he says they came in chatting at full blast at 1-2 am.

Tomorrow is my last day in Dunedin…