Thursday: Today we woke up to a breakfast of pancakes, bacon and maple syrup. The guys here are the most hospitable people ever. Actually wait, I first woke up when one of my incredibly intoxicated roomies fell out of his bunk in the middle of the night… I took a quick morning walk to the beach.

The waves are incredibly deceptive, they look perfect for surfing, but apparently it’s not suitable for swimming because there are really strong under currents and rips.
We drove through a small town called Ross. This was one of the most prolific gold mining towns on the west coast. Here, a 3kg nugget of gold was found, this was the largest gold nugget ever found in New Zealand. While there’s still gold in the area, it is not as easily found as it once was. This means the landscape is somewhat ripped apart to extract it.

After this we headed through the even smaller town of Hari Hari. It’s a super tiny farming town but it’s famous because a kiwi was the first person to fly from Sydney to Hari Hari in 1930 (it was the first successful trans-alpine flight) although he was originally aiming for Auckland. From here we weaved around mount Hercules – a twisty bending road that is taking us toward Franz Josef.

But first we’re going through Whatarua! It has a lake and glacier of the same name and has a huge wetland area where the white heron can be found. This is the only place in New Zealand that this migratory bird can be found, and is something of a mascot in the town, appearing on flags hung outside of houses.

We approached the National park and UNESCO world heritage site that houses both Fox and Franz Josef glaciers. Due to the glacial environment, there are lots of features around here that you’d expect, including lots of lakes or ‘kettle lakes’ (lakes that are specifically the result of glacial melt). These glaciers are pretty well known world wide, they are known to be some of the most accessible in the world, but sadly they are both currently in retreat due to climate change.

The surrounding landscape is a temperate rainforest.

Franz Josef glacier in Maori is translated into ‘the tears of the ice maiden’.

The town of Franz Josef is lovely! It’s a miniature hive of activity as people pit stop here to hike the glacial landscape. I’m supposedly to be doing a Helihike tomorrow, a helicopter is now the only way to actually get up on to the glacier these days due to erosion. The weather for tomorrow is not looking good though, in fact as I write this at 5pm, I’m optimistically hoping against hope that everyone is wrong. We’re booked in for the morning trip. If the weather breaks in the afternoon there may be a chance to fly over it on a scenic flight, but from what everyone is saying, the weather is predicted to be bad all day.

I found a super cute bakery called ‘Picnics’ and gorged on a pie and then a cream doughnut. Be warned… You only need one item! I only managed a third of the doughnut before I realised my epic error of judgement.

I’ve also come across a Wildlife centre (the brown tourist sign that says ‘kiwi rescue centre’ is actually referring to that whilst pointing in the wrong direction), it’s $35 entry which is a little steep but I’ll get to see more than one kiwi as there’s a nocturnal area inside!

I went in, after diligently reading all of the information I had been provided with. I let my eyes adjust to the dark and listened out for any sounds like rustling leaves. As soon as I focused and cleared my mind, I heard a tapping sound! There was a fat little ball of fluff tapping his beak in the metal food bowl as he noisily ate his supplemented food diet.

Moments later, I saw a tree vigorously moving around, only to see another ball of fluff at the bottom of it aggressively scratching away. After this, I quickly got used to the clumsy sound of kiwi birds stomping around the enclosure. I chuckled as I realised how graceless these cute birds are. In fact they reminded me of the dogs from the Aristocats when Layfayette is wearing squeaky shoes and scared himself.

I was transfixed by the little kiwis, I sat on the floor and peered in through the perspex wall and watches them do their thing. At one point one was standing on his legs, snuffling around the tree bark, I didn’t realise this did this, or how big they look when they stand upright. They’re very vigorous when foraging for food in the ground, but I suppose with only a beak to find food, it’s understandable.

I wasn’t allowed to take photos inside, but in total I saw three Rowi kiwis and it was magical! A real highlight! And luckily for me, I was the only person in the nocturnal area so I was lucky enough to have these little curious creatures all to myself. These are the rarest of all the kiwi and are only found in one forest on the South Island near to grab Josef. They weren’t even discovered or recognised as a species until 1994. After a while, I did think there was a slight damp ‘foresty’ smell, now I figure that was probably the kiwi scent. Apparently they have a very mushroomy oder which is why dogs can track and find them so well.

The centre also has information on glaciers – appropriate right! And very informative, plus the native animals on the South Island, including a video featuring the Pekapeka which is apparently New Zealand’s only land mammal. Looks like a bat / mouse! This surprised me because I’d previously been told NZ had no native land mammals at all. 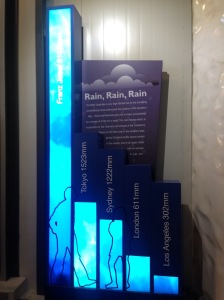 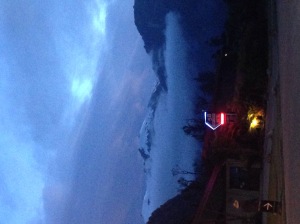