Tuesday: Today started with a traumatic experience. I was in the bathroom brushing my teeth when I felt an odd sensation on my leg… I reached down and felt a lump. My mind flashed to the beetle I had seen scurrying under my bed. ‘Shit *squeal squeal*’ I ran in to the toilet cubicle but I couldn’t see anything. I looked back out on the floor and saw a small pebble, ‘oh’ I thought, relived.

I headed back to my room and felt the same sensation on the other leg… No. This time there was no mistake. I whipped my jeans off at lightening speed and a balled up spider flung across the floor, eventually out stretching huge front legs *squeal squeal whimper whimper* 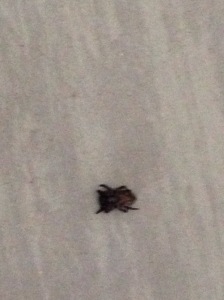 I tried to compose myself, feeling slightly betrayed by my favourite jeans as my skin continued to crawl in the wake of the wee beastie being flung out the door, unscathed of course, but leaving me whimpering. My sister supportively messaged me a link to Wikipedia on a ‘red back’ spider which she ‘guessed’ it was based on the blurry photo i sent along with the words ‘sounds like you had a lucky escape there’. Thankfully my dad intervened (family whatsapp group) and reminded me there are no poisonous spiders in New Zealand.

Putting ‘Spidergate’ behind me, I caught up with my emails, finding two rejections nestled in there between the travel blogs and Pinterest updates. ‘Not this again’ I groaned. The overwhelming sense of de ja vu and rising despair creeping up. I do get a positive email too though, but for some reason my mind focuses on the negative. Anyway, I’m not here for this right now.

I headed to the beach to read my latest book.

It’s a deep read but I love reading about the extraordinary lives of those seemingly ordinary people. Of course, I’m hooked before I’ve even begun the first chapter. This quote from Mike Tyson is particularly pertinent: ‘Everyone has a plan until they get punched in the face’.

I hop on the bus, I’m heading from Kaiteriteri to Westport (via Nelson lakes national park). Okay, is this just me being British… Lakes are not for swimming in, because typically they are gross, littered with abandoned shopping trolleys coated in pond weed. Canadians however, are accustomed to lake swimming. I know this from first hand experience as I visited the Plitvik lakes in Croatia last summer. All of the Canadians I was with (and he group was 99% Canadian) all had the urge to jump in and go for a swim (of course they didn’t, it’s not allowed). But I am not compelled the same way.

I’m beginning to connect with people on the bus more. We’re all heading the same way to Queenstown so it’ll be easier to make friends. As such, the driver has said we’re going to play a bus game – feeling both yay! And terrified too haha. It was intense but a great ice breaker! We didn’t get the whole way around the bus but it was really great. Everyone is friendly and open. I used to be really great with names, now it takes me a couple of times for it to really sink in.

I’ve also got this habit of thinking people are called the name that I think suits them or of the person they most remind me of. Thinking back, this confusion began in Geneva when I constantly referred to another intern, a Mexican, as ‘Eduardo’ instead of (long pause while I try to retrieve the name that’s on the tip of my long) ‘Ricardo’. Even to his face!

Nelson lakes (formerly a glacier!), one of 9 national parks in the South Island. What a brilliant place! I loved the hills and the way the clouds cast shadows on them, just hanging about, in no hurry to go anywhere. It was beautiful. This was only a pit stop on our journey today. 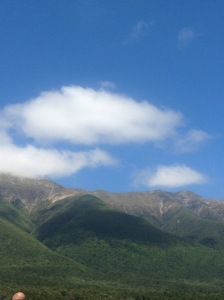 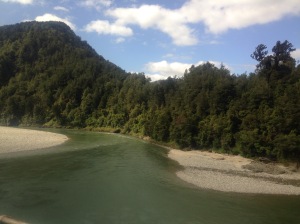 We drove along bullet river all the way to Westport (the wild Wild West of New Zealand). Apparently the west coast is super wild and rugged because it’s so exposed to the (Pacific?) ocean. It’s an area famed for its surfing.
I opted to go paddle boarding. It was a rush getting organised but it’s been on my bucket list (Yeo, the same as-yet-unwritten list as previously mentioned) for the longest time. As the pre-paddle chat began, I started to get nervous, very nervous… I started to panic. I’m not sure why but paddling along (on my knees for 98% of the time) gave me chance to reflect on this. I looked at the muddy banks and contemplated that it was less ‘lagoon’ (as advertised) and more muddy river. Not quite ‘swamp’ but not a million miles away either.

Was there a time I can remember becoming afraid? When my confidence faded? Not that I can recall actually. Was I scared of falling in and getting wet? Umm no? But I was afraid of whatever might be lurking beneath me. Of course, I couldn’t see a thing and that freaked me out all the more. I finally stood up at the end, success! But then we had to cross an intersection that went out to sea. We were miles from the ocean but I began to paddle faster in the opposite direction as it occurred to me that the sea can be very unforgiving and abides only by its own set of rules.

I wish I had taken pictures of this experience but at the risk of dropping my phone and/or camera in the water, I left them both at the hostel.

Despite a shaky start, the day ended a success! I even heard back from a PR recruitment agency at home which sounds very promising.

On to Greymouth tomorrow…