And as if by magic, the sun has gone! 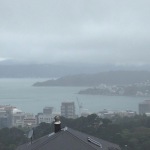 But I’m actually quite relieved to see some rain! The sun was really intense all of yesterday. At least today I don’t have to worry about getting burnt and the timing is perfect for my culture vulture day – unless of course, all the other tourists have the same idea.

As I previously mentioned, I want to make this week of activities as varied as possible, yet true to my own interests. With this in mind, I have a list of possible museums, galleries and exhibitions to see in Wellington today and I’ve booked cinema tickets for the Lighthouse off Cuba Street to end my day. I chose this venue because it’s been voted NZs best independent cinema for 2015 and frankly, I hadn’t even heard of it until my challenge this week! It’s also playing a film I’ve seen before but love.

My day started with a free tour of parliament. They run every hour on the hour, so you just turn up 15 minutes prior to it starting, (they request large groups book in advance).

The Beehive is actually the executive wing of parliament. It was really interesting learning about the history of NZ politics, the way that everything was streamlined from individual states to centralised government in Wellington and the role the UK monarchy has played. The buildings themselves have a lot of history which included fires and reconstruction, and even moving some (like physically picking up whole buildings and moving them – yep…).

I think being from the UK made the whole experience just that little bit more fascinating, particularly as this system is loosely based on ours. It was great to see the debating chamber and how that compares to say the House of Commons and there was also a brief mention of the flag referendum, but only very briefly. It’s pretty interesting to hear what Kiwi’s actually think of the flag situation, but I suppose that’s for another time.

The architecture in the building, including multiple stain glass windows are beautiful! There’s also a kind of indoor courtyard that houses artefacts from around the world.

I made the 12pm tour which lasted just over an hour (we were slightly late finishing because we went into the basement to see how the building is protected against earthquakes) and overall, it was extremely interesting and insightful, especially in respect of British history.

After the tour finished, I grabbed a quick bite to eat and headed to the City Gallery, which is free to visit. As I mentioned, I had a lot of places written on my list, but I didn’t feel too bad about starting a little later today and decided it was quality over quantity.

There were a few interesting exhibitions on display at the City Gallery (located just behind the i-SITE). My absolute favourite was a Grayson Perry tapestry. It was the only item I couldn’t photograph so I highly recommend taking a trip to see it. Everytime I looked at it, something new appeared, or made sense, or didn’t make any sense. It was great!

There were a few other exhibitions including; ‘Julian Dashper & Friends’, highlighting work by the New Zealand artist, a video by Camille Henrot which looks at the history of the universe, I really enjoyed the pictures by Dunedin artist Kushana Bush and ‘Unseen city’ which showed images from Auckland in the 1960s, around the time the motorway was being built. It was really interesting to see Auckland then, especially as the photographs capture the less glamorous side of the city. 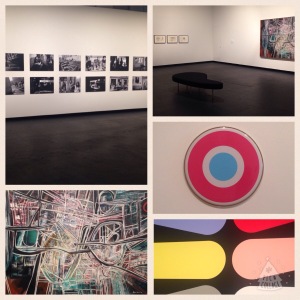 After the gallery, I headed to the Pukeahu National War Memorial Park and museum, which is also free. I chose this last because it’s open until 6pm, later than a few of the other museums I had on my list. I got there at 4pm so unfortunately I’d missed the last guided tour, instead I opted to buy a programme for $10 (the same price as a tour).

The memorial was really interesting and was a great introduction to the museum which is currently hosting a special Gallipoli exhibition by Peter Jackson, including a huge model replica of the area. The detailed accounts of what happened and what it was like for the troops stationed there was pretty haunting and it’s quite sad reading about all of the events that happened, but I think it’s really important to know. (I’d recommend seeing the Gallipoli exhibition at Te Papa as they tie together really well).

I was pretty hungry while I was at the museum and knew that I wouldn’t have time to eat before the cinema, so I headed to the cafe and ordered the smashed avocado and halloumi Vogel and a side of beatroot and feta salad. It turned out to be some of the nicest and freshest tasting food I’ve eaten here.

My culture vulture day ended at the Lighthouse Cinema off Cuba street, and it didn’t disappoint. 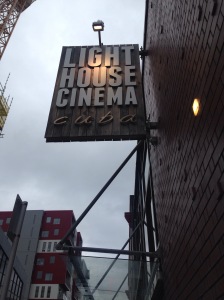 When searching for things to do in Wellington, there are several cinemas listed, including the Lighthouse and the Embassy. Going to the cinema in NZ has thus far been an experience entirely different to that at home. Mainly because it is an actual experience.

I also chose this cinema because they were screening ‘Big Eyes’, a film I’d previously seen but adore as it’s based on a true story and it’s a real David and Goliath type. This screening also posed a first for me. It was the first time that I went to the cinema by myself. Not a massive deal to some people, a huge one to others but I think I lay somewhere in the middle. 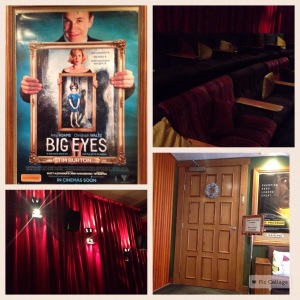 I’d definitely recommend paying the Lighthouse a visit, the whole experience from start to finish was brilliant. I can honestly say, it is like no other cinema that I have ever visited – in all the right ways.
*Please note: I haven’t been asked to promote any of the businesses mentioned in this post. I’m just sharing my week of experiences in Wellington*