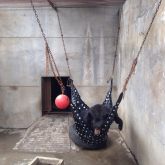 After a month in Vietnam, I headed to China. I was based about an hour outside of Xi’An for three weeks volunteering at a rescue centre, where I’d specifically signed up to the Giant Panda program. I’d been interested in this particular conservation work for a few years but as it’s all based in China, I hadn’t had enough free time to go and travel afterwards.

Once I got there, however, it wasn’t necessarily what I expected.

On first arrival to the centre, Jon and I walked around the facilities. To say we were a bit underwhelmed would be an understatement. I’m not saying that we were expecting anything new or modern, but, the best way to describe our initial reaction is this: ‘imagine you visit a theme park that isn’t used every often anymore, it’s kind of run down and generally feels a little unloved, although you can tell the staff really care about it because they’re sweeping up and keeping the place tidy.’ We later found out that the centre wasn’t in great condition because they were investing all of their money in a new purpose-built (state of the art) place on the mountain side a bit higher up from the current location, specifically for the Pandas. This explained why things looked a little tired, but not why the place felt a bit strange.

The main aim of the volunteer project was for us to witness and experience what it is like to be a Panda keeper and to work closely with these super endangered animals. Although there were other animals at the centre (including rescued animals), this project was specific to Giant Pandas as the centre has a fairly successful breeding program. From a business perspective, breeding pandas (I think) is fairly lucrative in China, in the sense that, I think (I can’t concretely say this is true, so please don’t quote me on this) that there are Government rewards or bonuses for successfully breeding them. It felt like the Pandas were more important than the other animals, like they were superior. It made me question why they’d rescue other animals if they didn’t care? I’m not saying that the animals are abused or harmed, but I felt that some were a bit neglected at times.

This is where the Moon bears come in… 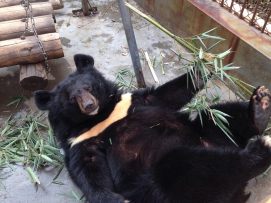 Before I visited China, I had never heard of a Moon bear, let alone seen one. I think their endearing nature is what drew me to them, particularly after learning about their struggles.

In traditional medicine still popular in Asia, particularly in China, Vietnam and Cambodia, it is believed that the stomach bile from the Moon bears can be used for things including healing and boosting fertility. The thing is, the bears suffer immense cruelty in order to extract this bile. They are caged as cubs so they can’t grow properly and a pipe or tube is inserted into their gallbladder basically forever. And this is their life. It’s terrible and I’ve read about this in more detail since volunteering. There is some evidence to suggest that the bile has some of these properties, however, there are now synthetic varieties that work as effectively. There really isn’t any reason why this practice should still exist.

I learnt about the Plight of the Moon bears from an Australian called Claire, (aka Claire Bear). She was volunteering when we arrived, and has been coming to this centre, for these Moon bears for the last 10 years, (twice a year, every year). I quickly realised that if it hadn’t been for Claire, who knows what state the bears would have been in.

To explain, the bears were not treated cruelly in the sense that they were abused or mistreated however, some of what I witnessed made me question why the centre would rescue animals if they don’t have the capabilities to look after them.

For instance, on one particularly hot day, it was national tomb sweeping day, a public holiday in China, so the Moon bear keeper had the day off. I went to see the bears as I always did after Panda work, and I found that some were locked in the inside of their enclosures, and some were locked outside. The ones on the insight had no light, but water and perhaps some old apples, but the ones on the outside had no food, water or shade. There were two workers at the centre who cared about animal welfare as much as Claire,  and eventually they found a spare set of keys so that we could open up the cages. But it was about 4pm by this time. The whole situation frustrated me so much. How could this happen? I just wondered, what if we hadn’t been there? What would have happened to them?

The bears seemed to be a total after thought.

I was reminded of this on a daily basis as they never seemed to have enough food for them. Maybe they’d get an apple and half a panda cake, but that was it and it was never consistent day-to-day. They didn’t get any treats or enrichment once Claire left, unless there were volunteers who knew about them. We knew they’d be okay as long as there were volunteers, but, if it wasn’t for the volunteers, what state would they be in? And I’d wonder: is this a better life than what they had? One the one hand, I feel like it is, but it isn’t ideal.

Enrichment provided by Claire included giant tyres for them to play with, which were taken away after she left as the keeper said it took him longer to clean the cages with them in. It also included maintenance such as the new bear hammock we made from seat belts. 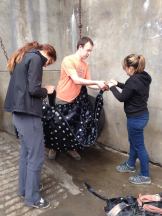 Overall, I think I enjoyed volunteering because I actually felt like I was making a difference to the lives of these bears, if only for a brief period. I often think there are volunteering opportunities where you don’t necessarily feel like you are helping or making a difference which can be frustrating and disheartening when you go with that intention. I also think I should point out that my experiences here were not entirely negative, Claire has made great efforts to improve the quality of life for these bears and there are those at the centre whom also help too. Furthermore, I realise I was very lucky to work closely with Moon bears, Giant Pandas and to feed Red Pandas. 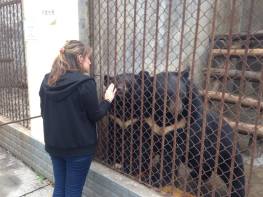 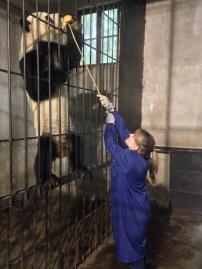 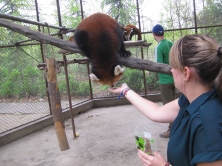 We also got the chance to see a super rare panda. He’s brown as a result of a genetic mutation so there’s no guarantee he’d have brown babies. He’s perhaps the only one in the entire world.

What a difference a year makes.

When we first met Claire, I got the impression that whilst the centre meant well, not a lot had changed in the 10 years she had been going, the situation just never seemed to improve for the bears. Management would say things, but often, there was so much red tape and bureaucracy that nothing ever really got going. I just expected that things would continue on as they had been.

In March this year, I caught up with Jon. Apparently I’d missed a lot.

It turns out we were probably some of the last volunteers. I did some googling and I found this article. I hope that things aren’t as drastic as it makes out. I question what life is like for the Pandas and Moon bears now. There aren’t any volunteers anymore, the centre continues to face scrutiny over how and why the Pandas died, Nang Nang the Moon bear died and Sunny & Chang’e ended up moving to a new place.

I think that Claire has visited them once, but it’s just sad because as Jon and I were leaving, we helped to move the bears around a bit so that they could try out different pairings. Chang’e was so timid and shy, but then she moved in with Heng Heng and she started coming out of her shell. I think that was one of my favourite things about the bears and why I became so attached to them, they each had their own personalities, and even though each of them had more than likely been mistreated in the past, they were very forgiving and could easily tell if you were a ‘bear person’.

This whole experience reminded me of Animal Farm and the notion that “all animals are equal, but some animals are more equal than others”. 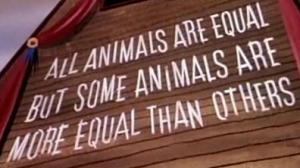