Last year, I wrote a blog highlighting the issues of animal conservation Vs animal tourism Vs responsible animal tourism, specifically in Thailand. 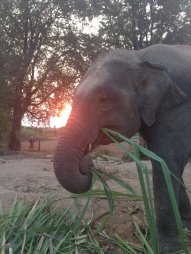 These topics are increasingly being discussed and questioned in the media and by travel operators around the world. At times it can be hard to differentiate between what exactly conservation is, what it looks like and how it is measured and what exactly the ‘right’ kind of animal tourism is. While the previous blog post focused on Tigers, this post will concentrate on Elephants – arguably the national animal of Thailand.

During my six weeks in Thailand, I had two encounters with elephants planned. One, an elephant trek which I was apprehensive about  after reading this article a few days before I departed, aside from this trek, I decided to spend two weeks volunteering at an elephant conservation project.

Firstly, to address the trek; It lasted around 30-45 minutes and involved walking around flat land on the back of an elephant. I didn’t know how I felt about it at the time, apart from feeling petrified the whole way! I felt like the elephants were well looked after, not over worked and in good condition which was somewhat reassuring, however, I’m still not sure how I feel about this kind of tourist activity. I definitely disagree with the jungle treks that last for hours or even days but at the end of the day, a trek is a trek so I cannot justify the trek I went on.

During the two week conservation project, I not only got up-close to elephants, but I learnt about their history, their significance within Thai culture and the difference between conservation projects and elephant camps for tourism purposes. I suppose conservation projects around the world are arguably a unique form of animal tourism that should not be classed as being the same as animal related activities like visiting zoos because ultimately they are fundamentally different.

The elephant project was based about an hour outside of Surin, just past the famous ‘elephant village’. The work was rewarding because it actually benefits the elephants directly. We spent time collecting banana tree leaves which were used to feed the elephants, and chopping down sugar cane with machetes, then chopping it up and replanting it so that it will grow again and be harvested by the next volunteers.

We also planted and watered crops by the river some afternoons where we walked (or rode) the elephants to. I learnt a lot about elephants in relation to Thai culture, the way they were used during the Thai and Burma wars, and the fact that elephants are so respected that once they die, they are given a proper service with a monk and buried in an elephant cemetery.

Ironically, at some point while I was away, I read this article by Intrepid. I found this interesting because of the way that they position themselves as a responsible travel organisation (I have no reason to think otherwise) and discuss the key issues that the responsible animal tourism debate largely centres on.

After sitting on the back of an elephant for 10 minutes I knew it was not for me. I was utterly petrified. From then on I decided to walk my elephant. I found this far more enjoyable but I also considered this in relation to the responsible tourism debate. Does this make me more responsible or is this still not quite right?

At first it was sad to see the elephants chained up but we were told that they have to be chained up because otherwise they will roam around and eat everything – literally! Not only is this a potential problem for the farmers who own the crops, but for the mahouts that own the elephants because they would have to pay to replace the crops. It made me realise that wild animals can’t really be free anymore because of our modern, human demands on society. At the same time, it made me realise that responsible animal tourism is the only way that some wild animals can now live a typical life.

As part of our day off, we visited the elephant village where some elephants are used for entertainment and tourism purposes – I think it highlighted to me how intelligent these giant creatures really are and also the difference between animal tourism and animal conservation projects. I think it’s sad that animals are used in this way in order to make a living, but I also understand that this is not a clear cut issue, especially in Thailand where many elephants were once used for logging and are now needed to do something else in order to earn money.

The title if this blog alludes to the book Eat Pray Love… It was during this two week project that I started to really get into this book, which I found wholly enlightening and totally life changing. I realised that I wasn’t really happy in my relationship, and neither was my partner. We just weren’t right for each other, everything had been a challenge and we had been selfish.

On New Year’s Eve going in to 2014, we weren’t getting along, we were in different places (both literally and figuratively) but we decided to ‘give it one last go’ even though I was about to go travelling for 4.5 months and we weren’t going to see each other until I got back. I realised we weren’t working because we just weren’t right for each other, we never had been and we never would be. I realised that if we kept going, I’d be Elizabeth Gilbert at 30, crying on the bathroom floor, probably asking ‘what is my life?!’ and asking for some kind of divine intervention.

I thought long and hard and I became single. Strangely, reading this book and the repetitive manual work I was doing (which was kinda therapeutic) made me realise how free I am. I kinda felt like I had wings and I’d only just realised for the first time in my life. Not just because I was no longer in a relationship, but because I realised that the volunteering work I was doing – that I had chosen to do – is life for some people. There’s no choice or option involved, it’s necessity.

Suddenly I felt really free and really lucky – not just because I can travel, but because I was there. I was actually doing it. I was living out my dream. And I realised that so many people in the world have dreams, some to travel, some more basic but big nonetheless. I realised I’m free because I can dream and make my dreams into a reality.